We conducted another workshop with children at Dadar(West) on 30 April 2016. There were 7 participants : Prisha, Aidan, Aadya, Snehal , Ishaan, Dhruv, Nitya. The children were of the age group (8 to 10 years)

We started with a quick warm-up using a mind stimulating exercise. In this exercise, one participant starts with a random word and the next participant has to immediately blurt out any word that comes to his/her mind, without much thinking. This exercise brings the minds of the participants to a focused, alert state.


The aim of this activity is to boost the children's imagination. In this activity, the children were   exposed to some famous works of art. About 20 artworks of different artists were shown to them randomly. By observing the artworks carefully and taking the inspiration from the artwork, they were supposed to select one object of their choice, from those artworks.
Once the object was selected. They were told to draw the object on the sheet of paper.
The children enjoyed watching the artworks and were very keen on understanding it. They identified the objects, colours, the minute details like shading, textures. They also could conclude on the subject of the painting and were thinking and trying to imagine various ideas/ stories that could come off from the artwork. Some works were shown which were abstract/surrealistic , to which children responded with their own understanding.


After the viewing of the artworks we gave them a quick re-cap of all the works once more so that they could recollect and select from what they saw.

The aim was not to just select and draw what they saw from the artworks, but to imagine more about the object they selected and expand it further.

There were some interesting results:
Children mainly selected their objects from following works.

Vincent Van Gogh's Sunflowers:
Dhruv painted vase with flowers and he also said that he observed some sunflowers with no petals in the shown work, so he also added some to his painting along with butterflies. It was interesting to see how his paper was quite clean and he was focused on just the vase itself leaving the rest of the paper completely blank. Dhruv has a sense of capturing an image greatly in his memory.
Nitya also took inspiration from sunflowers and created vase with flowers and added many smaller vases with flowers to her painting taking liberty; there is no sense of gravity all the smaller vases are floating in air and there is no porportion amongst the vases unless she is trying to show depth. She had made beautiful textures on the big vase. The left flower in the big vase; she has tried to bend her flower which seems to be adapted from the reference painting.
In both the works done by the kids we see a lot of yellow colour which definitely comes from the artists yellow sunflower. Nitya has changed the flower in her drawing but has continued the essence in the form of colour.

Aadya chose apples from Cezannes work and she created a basket of apples and added other fruits to her work. Her choice of colours was also interesting. She saw in Vincent Van Gogh painting of sunflowers how he had written his name on the vase, Aadya took that and wrote her own name on the basket. She has taken the compositional sense from Cezannes work with the basket of fruits on the left side and a lone apple on the right. She has shown proportion among the fruits with the pineapple larger than the apples.

Ishaan and Aidan selected dragon as their object and created their own works with their imagination adding fire, human figure, tree. Ishaan has created different form of fire. He has also attempted to to shade his creature with interesting colours.
Aidan tried to portray a roaring gesture of the dragon in his work. He wanted to make his work look like a comic. if looked at carefuly his painting seems to be in motion as if its really happening. his groung is quite bare with his composition heavily composed on the upper side almost giving it an antgravity feeling.

The Son of Man (Le fils de l'homme) by René Magritte
Prisha selected the Man from Rene Magritte's work and added her own imagination to the work. In the Magritte's work, the children stressed on the red colour of the tie and were also discussing that the man's hand had a shade of red colour. It could be possible that because of their focus on red colour, Prisha chose to paint the hands of the Man in red and also painted his clothes in the same colour. She has made a good attempt to make new shades of blue and gray using the ones that we give them. She is quite confident with her brushwork. But it seems she soon lost patience as others had completed their work and did not complete the painting

Apart from these works, here's Shenal's work which contained objects he recollected from various works.


Paint Together
The aim of this activity is to allow children to be guided by their own free creativity and to be inspired by the creativity of others who contribute to the painting. A big paper was stuck on the wall, and children painted on it one by one. They were supposed to draw/paint something new or add/modify what is being drawn/painted already. The brush, colours, markers, crayons were provided and children could freely choose the tool they liked. In order to allow them to get into the flow, some music was also played. When the activity started, children came one by one and carefully drew their drawings on the paper. But as the time passed, with the effect of music (as we told them to dance and paint) they started relaxing and used brushes and colours to add to the existing drawings, filling the shapes, creating something new and also destroying the earlier work.
As observed from the previous workshops, it was evident that the children get influenced by actions of other participant's work so this can be used positively to allow them to get inspired by other participant's creativity. 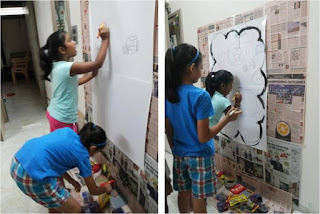 Mousai
We are a group of three artists who love to experiment with art and experience life in art and art in life.